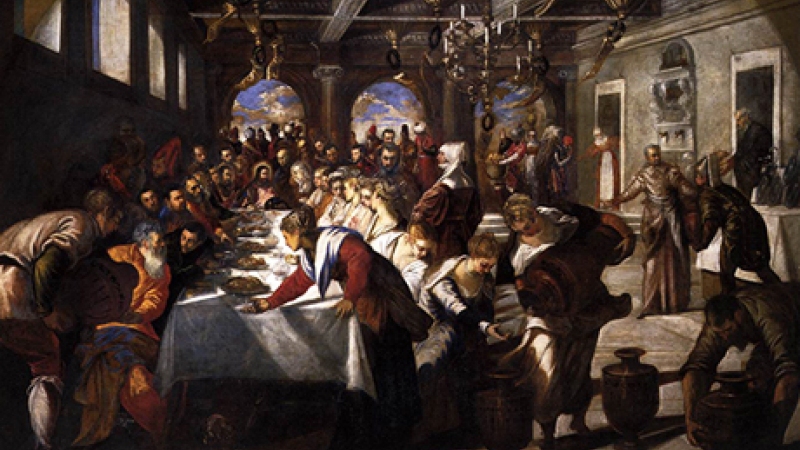 A sermon of St. Bernard for the 2nd Sunday after Epiphany.

In the reading of today’s Gospel, Brethren, we have heard that Our Lord went to a wedding feast. Let us then do that which He elsewhere admonished us to do and become as those men who wait for their Lord, when He shall return from the wedding (Lk. xii. 36). One does not say to a man holding a wagon in the field, or to one buying or selling at the market: whom are you expecting? Neither are we like to those who so wait, but to one whom we see standing by a door, frequently hastening out, looking out often from the windows, is it to be wondered at if we say: whom are you expecting?

They indeed are like to the men who wait for their Lord, who have heard, and not with a deaf ear; Be still and see that I am God (Ps. xlv. 11). For the Lord will come to those who wait for Him in truth, such as he who said: With expectation I have waited for the Lord (Ps. xxxix. 1). He will come as one returning from the wedding, inebriated with the wine of love, and forgetful of our offences. He will not come to those who wait, as one returning from the wedding like a mighty man that hath been surfeited with wine (Ps. lxxvii. 65). He will come as one inebriated, and unmindful of His own sorrows. And then, as to those others, God will forget to be merciful. He will come in wrath, and indignation, as an angry man; but, O Lord, rebuke me not in they indignation (Ps. vi. 2). These words are spoken, not so much with reference to the present wedding feast, but rather on its occasion.

Let us together with His Disciples follow the Lord as He goes there, so that seeing that which He is about to do, we may also with them believe in Him. And the wine failing, the Mother of Jesus saith to Him; they have no wine. She, most kind and compassionate, has pity on their embarrassment. But from that source of tenderness what could flow but compassion? What wonder, I say, if that compassionate heart should show such tender consideration? For should anyone hold sweet smelling fruit in his hand for half the day, will not the fragrance of it linger there for the remaining half? How much therefore did the power of love effect that heart where He rested for nine months? And it filled her soul before it filled her womb: and leaving the womb it departed not from her heart.

The answer of Our Lord could seem stern and unfeeling: but He knew to whom He was speaking: and Who it was that spoke she also knew. And that you may know in what manner she received His answer, or how great was her confidence in the compassion of her Son, she says: Whatsoever he shall say to you, do ye.

Now there were there six watering pots of stone, according to the manner of the purifying of the Jews. We now propose to set these six watering pots of stone for the purifying of those that are Israelites indeed, not in the letter but in the spirit, or rather that being set there to point them out to you. For the Church has not yet reached that perfection, when purified and made glorious, and without spot or wrinkle, or any such thing, Christ shall present her to Himself (Eph. v. 27). Meanwhile she has need of manifold purification, yet though sin abounds, forgiveness also abounds, and just as misery is multiplied so likewise is mercy: though not as the offence was, so also the gift (Rom. v. 15). For His grace not alone washes away our sins, it also bestows merit.

The six jars therefore have been placed there for those who after baptism have fallen into sin. It is of these we now speak: for to these we belong. We put away our old stained garment, but alas, now more guiltily have we put it on again. We washed our feet: but we have soiled them worse than before. And as he who soils himself must cleanse himself, so we having soiled ourselves must wash ourselves clean. Another’s water has cleansed those whom another’s guilt has stained. Yet saying another’s I deny not that the guilt is also ours: otherwise it would not have stained us. But it is another’s, because all we unknowing have sinned in Adam; it is ours, because, though in another, we too have sinned, and to us the fault was imputed, by the hidden though just judgement of God.

Yet, that you may not have cause to complain, O man, against the disobedience of Adam, for you is offered the obedience of Christ, so that though sold to bondage for no fault of yours, yet are you freely purchased back; if unknowingly you died in Adam, unknowingly you live again in Christ. You knew not when Adam stretched forth guilty hands to the forbidden tree: neither did you know when Christ stretched forth unblemished hands upon the saving tree. From the first there flowed down to you the blemish by which you were stained: from the side of Christ the water flowed whereby you are made clean. Now by your own fault you are stained again, and washed clean, not by water that is yours, but by Him and through Him, Who alone cleanses us of our sins.

The first watering jar therefore, and the first purification, is that of repentance, since we read that if the wicked do penance for all his sins which he hath committed, I will not remember all his iniquities that he hath done (Ezech. xviii. 21, 22). The second is confession. All things are made clean in confession. The third is almsgiving. So we read in the Gospel: Give alms, and behold, all things are clean unto you (Lk. xi. 41). The fourth is the forgiving of injuries, according to what we say when we pray: Forgive us our debts, as we also forgive our debtors (Mt. vi. 12). The fifth is mortification of the body: hence, in our prayer we ask that through abstinence in this world, we may come to sing the praises of God. The sixth is obedience to such counsels as were given to the Disciples, and would that we also might merit to hear: Now you are clean by reason of the word which I have spoken to you (Jn. xv. 3); because they were not as those to whom He said: My word hath no place in you: for they hearing His word gave heed to it (Jn. xviii. 37).

These are the six water pots set for our purification, and which are empty and full of wind if they are used in vain glory. They are full of water if they are used in the fear of God; since the fear of the Lord is a fountain of life (Prov. xiv. 27). The fear of the Lord is, I repeat, water, which, having simpler flavour, is yet supremely refreshing to the soul parched with evil desires. It is a water that can extinguish the fiery darts of the wicked one. Nor is it against what we are saying that water seeks the lowest level: for fear leads down to the deepest reflection, and lights up the abode of darkness to our fearful mind, as we read in Isaias: In the midst of my days I shall go down to the gates of hell (Is. Xxxviii. 10). But by divine grace this water is changed into wine, since perfect charity casteth out fear (I Jn. iv. 18).

The water jars are described as being of stone, not so much because of hardness as because they are enduring. And as containing two or three measures apiece. Two measures mean a twofold fear: the fear of being cast into hell, and the fear of being shut from heaven. But since these have in mind the uncertain future, and since the soul can deceive itself, as it were, saying: after you have had a little pleasure then do penance, so you neither lose the one nor perish in the other, it is therefore expedient to join to them a third fear, one known to those that are spiritually minded, and which the more it is present to us the more we profit from it.

For those who have tasted spiritual food are ever fearful lest they be defrauded of it. They need robust food who have put their hands to difficult tasks. Let them live of the straw of Egypt who slave in works of clay, and brick; for us stronger nourishment is needed, since there is a long way before us, that we may journey in the strength of this food. This is the Bread of angels, the living Bread, our daily Bread. It is of this we were promised we would receive a hundredfold in this world. And since to the hired servant there is given his food while he labours and his wage at the end of the day. So also at the end the Lord shall render us eternal life, and meanwhile He promises us a hundredfold, and He fulfils His promise (Mt. xix. 29).

What wonder then that a man should fear to lose this grace who has once attained it? This is the third measure, which He has clearly set before us, but with a distinction, in that it is not for the use of all: for not to all was a hundredfold promised, but only to those who have left all things.